By: Focus Learning Academic Centre   view all programs and sessions

The course is a based on the popular science book by physics professor and long-time comic-book fan James Kakalios. First published in 2005, it explores the basic laws of physics.

Rather than showing where the world of superheroes contradicts modern science, instead we focus on examples of comic book scenes that can be used to understand the diverse laws of physics from an unusual angle, such as Ant-Man's ability to punch his way out of a paper bag.
The group explores the laws of physics through the lens of history with connections to comic book heroes and modern popular culture. The great scientists of the 20th century and the past are examined for the long lasting inventions and the lasting change on humankind that their findings revealed.

Fun and educational software in the form of simulations are shared together student research and group presentation.

Design and Create your own Superhero with a written description of how he/she came to possess their powers. In addition to their strengths, their vulnerabilities must also be exposed. 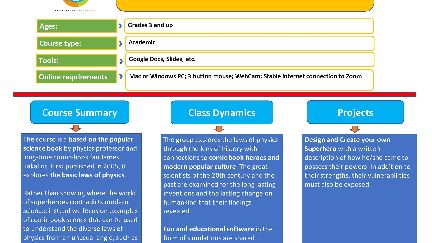 Thank you for your interest in Focus Learning Academic Centre. They will send you information about this session: