Falling math scores? It's not what you think.

Educators Kelly Gallagher-Mackay and Nancy Steinhauer respond to claims that Canadian students are lacking the basics.

by Kelly Gallagher-Mackay and Nancy Steinhauer

Highly respected international test scores released by the Organization of Economic Co-operation and Development (OECD) reveal that Canadian students have slipped from the top ten economies in math scores and fallen in performance between 2006 and 2015. Though some argued about the meaning of the rankings (after all, several of the top-performing “economies” were newcomers to the testing program and were cities, not whole countries, which skewed results), their voices were drowned out by more alarmist reactions. In 2013, John Manley, from the (then) Canadian Council of Chief Executives, declared the fall “on the scale of a national emergency,” explaining that Canada “needs knowledge workers to really improve our prosperity and build our society.” In 2014, the Edmonton Journal ran the twenty-six-part series “The Great Canadian Math Debate,” with headlines like “Parents demand a return to conventional ways in math and “This new math is stealing their confidence and their dreams.” A year later, the CBC’s phone-in program Cross Country Checkup asked listeners: “is there something wrong with how math is being taught?”

The talk of national emergency sent governments and media looking for causes, and a popular narrative emerged: Canadian students were not doing well in math because of a failure of teachers and schools to spend time on the basics. Frustrated mothers of eight-year-olds who didn’t’ know how to multiply publicly shared their stories, and a C. D. Howe report by math professor Anna Stokke told them “faddish” inquiry-based learning was to blame. Stokke insisted direct instruction on basic skills like fraction arithmetic and times table memorization should constitute 80 percent of time spent in math.

Math is a soft target. The anxiety that comes from watching an eight-year-old struggle with the seven times table bleeds easily into a common-sense explanation for declining performance among fifteen-year-olds asked to use math tools to solve problems, interpret the results, and apply them to judgements and decisions about the real world. But the connection misses an important nuance: although math achievement among Canadian students has declined, a variety of measures tells us our students are generally doing quite well with their basic math facts. Where they fall behind those at the very top of international test measures is on questions that require them to apply those skills in novel situations and to unfamiliar problems.

So, for example, on the Programme for International Student Assessment (PISA), a global education survey, 96 percent of Canadian students were able to handle a Level 1 problem that asked them to read a graph tracking music sales and identify what month one band outsold another; but only 39 percent of Canadian students were able to solve a Level 4 problem requiring them to calculate the maximum number of people who could pass through a revolving door in thirty minutes if the door had a two-metre diameter, made four rotations a minute, and only allowed two people to enter at a time. In Shanghai, the top-performing jurisdiction, 89 percent of 15 year-olds answered the Level 4 questions correctly.

In 2016, half of Ontario grade 6 students failed to meet provincial math standards. However, two-thirds of the Ontario provincial math exam tests students on “thinking and application questions”: questions that demand more than just the application of an algorithm, instead requiring multi-step reasoning. Students who can simply do calculations—or basic math—do not meet the standard. A false dichotomy between students either learning the basics or having the opportunity to do complex learning in real-world contexts misses the crux of the challenge. 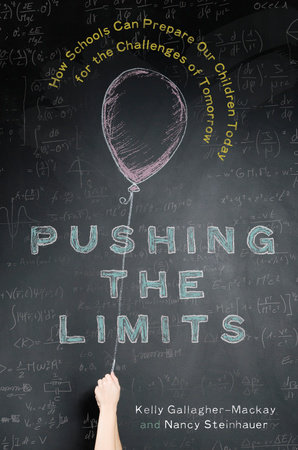 Excerpted from Pushing the Limits: How schools can prepare our children today for the challenges of tomorrow

Co-authors Kelly Gallagher-Mackay and Nancy Steinhauer are long-time educators and writers. Steinhauer is also principal of the Mabin School.