A better way to learn

With 160 courses, a faculty of 70, and 5000 students, Blyth Academy Online is demonstrating what online learning can be. 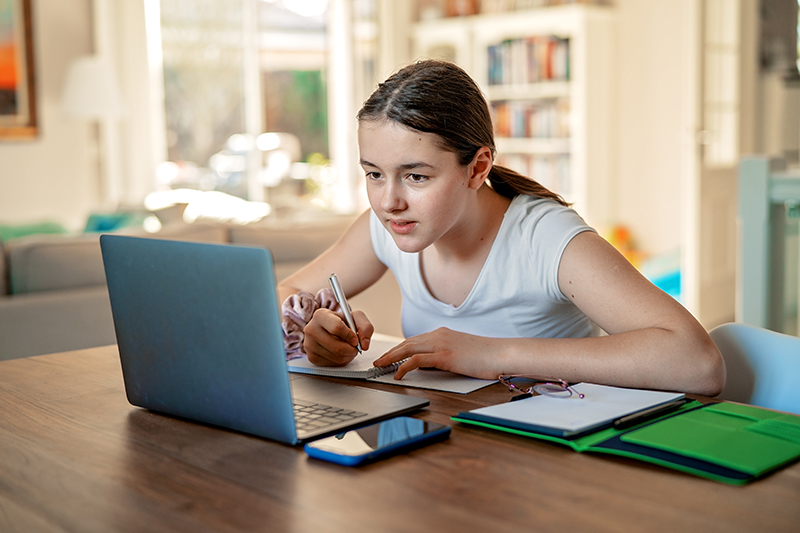 When I reached James Newton recently he was working through a chemistry lab. “I’m doing the combustion of methane,” he said. He had all the materials and diagnostic tools at hand, including a calorimeter, or at least a virtual version of one. “You take all the values from that, and then do calculations and answer questions.” He was learning about the first and second laws of thermodynamics.

The only thing the lab lacked, it would seem, was the lab itself. Since the start of the school year, James has been enrolled full time at Blyth Academy Online (BAO), the largest and most prominent virtual school in Canada. Were the students to gather together—James is one of more than 5,000 currently enrolled—they would comprise the second largest secondary institution in the country.

Given that he started in September of 2020, you might reasonably assume that the impetus for him to enrol at BAO was the pandemic, though you’d be wrong. Instead, James looked to Blyth because he’s a golfer. He’s ranked in the top 200 players globally. In Canada, he’s in the top 15 for his age group. (“Maybe I’m a bit biased,” says his father, Peter, with a chuckle, “but that’s pretty good.” It is.) Since last summer he’s been at a coaching facility in Florida. He trains between five and seven hours a day. When he’s not doing that, he’s online completing the requirements for his Ontario high school diploma. He’ll graduate from BAO later this year.

For those without any direct experience of online learning—admittedly there are fewer of those now these days than there were a year ago—it’s easy to wonder why some students would choose a virtual school over a real one. James, however, is a prime example. Given that the courses are asynchronous—there are no Zoom sessions or Google Meets—he’s able to time his lessons around his training schedule. For him, that’s proven essential, and he’s not alone. “There are many students who are athletes,” says Alyssa Cundy, the student experience coordinator. “We have others who are actors and on set in the United States. …  They can fit their schooling into their schedules.”

That said, Cundy notes that the reasons for choosing an online option are almost as varied as the students themselves. Some are taking a full course load, as is the case with James, while others are reaching ahead, or retaking credits, or accessing courses that aren’t available at their local brick-and-mortar school. “We have a very active language department,” says Cundy. “We teach Mandarin Chinese, Italian.” There are 160 courses on the current syllabus in total, ranging from Grade 12 calculus to fashion design to travel and tourism to lockchain technology. Some courses, including Data Science, Data Literacy, Artificial Intelligence, are entirely unique to the Blyth setting.“We really try to be at the cutting edge.” Also unlike many online schools, teachers are available for weekly office hours, typically hosted on  Zoom.

Cundy believes that if there was a time when students turned to online instruction because of convenience, those days are past. Given the progress in the development of the platforms and the delivery, some are choosing it because of fit, true, though others are choosing it purely out of preference. It’s not only the way they want to learn, it’s the way they learn best. One student living in Ottawa told us, “it’s gotten me to produce better work.” She lives down the street from a public school and world class private schools are nearby as well, but she likes the things that learning online offer. She’s able to work ahead in some areas and drill down in others. The school year is 12 months long, though she’s free to set her own pace, working quickly through material that comes easy to her,or taking time with concepts that prove more challenging.

“I feel that I’m learning way more than I would during a typical day at [in-person] school,” she says. “Instead of doing one lesson, one thing, I’m learning five different things in a day.” She feels her time is better spent. “In day school there’s a lot of busy work going on, and lots of tedious tasks that aren’t’ always focused on the learning. … I’m not wasting my time watching movies in class … I’m doing real work all the time." Her mother agrees. “I recognize it’s not for everyone. But this type of independent platform works well for her.” She adds, “It feels good for her.”

“We do realize that it isn’t for everyone,” says Cundy, using a phrase that she and both parents we spoke to used with us. Still, she says, “we’ve had students go on to Harvard, as well as competitive programs at U of T and Waterloo. So it really does seem to fit with a wide variety of students.” For many, online asynchronous learning is increasingly less of a plan B—the thing that students and families turn to in the absence of other options—and more a plan A, the one that is the best for who they are, how they learn, and the skills they need to develop to reach their personal goals. “We’re teaching kids about self-confidence, independence,” says Cundy. “This is self-paced learning, but they’re also able to harness cutting edge technology skills that are going to serve them well in the future.”

The reason, largely, is the great strides that have been made in online delivery. Gone are the static web pages, replaced with active sessions and lively discussions. In that, Blyth is leading the charge precisely because of its extensive experience innovating within the educational space. Founded in 1977, the school was created in an understanding that, as the world changes, the needs of students change, and education therefore must evolve to meet them. Blyth has consistently proven its ability to realize that mandate, something they are showing now as they occupy the leading edge of academic delivery in the digital age. In addition to BAO, they introduced Blyth Orbit last year, an entirely synchronous learning platform.

Through the pandemic, particularly, Blyth has further demonstrated the benefit of a having such a broad range of resources and expertise to draw from—when other schools were setting up their virtual platforms, Blyth had a vast syllabus already up and running—and a unique ability to remain agile in response to the learning context and students’ needs

These are all reasons why the school is turning heads today. James’ father, Peter, admits that “coming from a family background that is heavy in the sciences I was doubtful of the science courses and the labs online. But James has shown me what he’s doing, walking me through the various labs and the tools—the way he gets to test things using the lab tools—and I’m fully impressed with the way those are managed. Obviously, this online learning material has come a long way in the last 20 years. That part of it has absolutely impressed me.” He mentions the various supports—one-on-one essay coaching and a dedicated academic counsellor—as things that many might not immediately expect as aspects of virtual learning.

The reality is that virtual schools, and Blyth in particular, are broadening the choice available to students in Canada and around the world. For students like James Newton it means they don’t have to choose one thing over another. For many others, it’s a chance to learn in the ways they learn best. That common refrain that “this isn’t for everyone” is true of every style of learning and every school. Some students get the most out of cooperative learning, others in teacher-directed formats. Some like crowds and stimulation, while others learn best in a quiet room. For many, Blyth Academy Online has opened up a range of opportunities to thrive now while looking ahead to the next step in their lives, be it in university, the golf course, or wherever else their imaginations, their talents, and their curiosities may take them.

July 28, 2021
Stuart Grainger, Trinity College School
“If you’re a genuine educator, a genuine teacher, you just want to have an impact on a kid's life.”

June 22, 2021
A place for children
The York School is not specifically a Montessori school. But Maria Montessori would have loved it, nonetheless: the school is animated by a passionate focus on making learning hands-on, social and engaging.
May 26, 2021
Why your school needs Zebra Robotics
For many educators it’s been a struggle to meet the requirements of the new Ontario coding curriculum. What if they didn’t have to?
May 5, 2021
The evolution and controversies of online learning in the classroom
Perspectives, opinions, and debates
May 4, 2021
The pros and cons of online learning in schools
The viability of an online learning school