If you're a genuine educator, a genuine teacher, you just want to have an impact on a kid's life 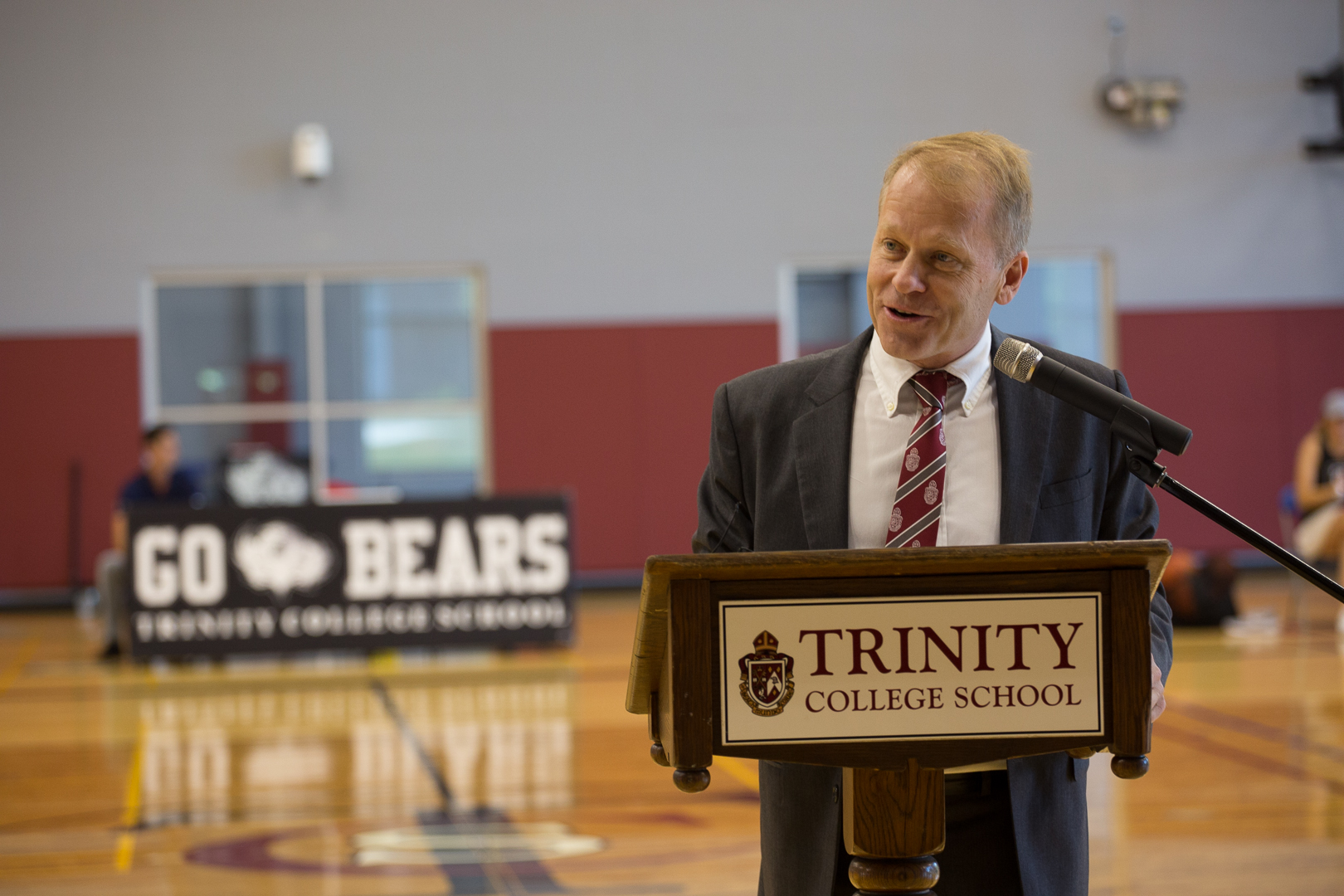 Stuart Grainger has been the headmaster at Trinity College since 2004, one of a long line of impressive leaders. Where the earliest head masters were very much leaders of their time (the school’s first, Charles Badgley, took boys out to dig for fossils, per the Victorian craze for natural history) Grainger is as well. Prior to arriving at TCS he served as headmaster at Bayview Glen, was head of the junior school at Hillfield Strathallan, and taught at Ashbury College.

Outgoing and informal, Grainger is unabashedly confident in what TCS can offer. (“I’ve had three kids here and they happen to think it’s the best school on the planet,” he says.) He doesn’t conform to whatever image you might have of what a headmaster might be. He’s affable, and clearly comfortable in social settings. He’s universally liked by the students, all of whom he appears to genuinely know by name. Which is impressive, given that there are over 560 of them. He maintains a blog with regular, well-composed entries. It’s not essential, of course, but it’s a nice touch. It signals a commitment to engagement, something that defines Grainger’s term at the head of the school.

“I love Mondays,” he says when we ask what he likes about his role. “I work with a great leadership team, faculty, staff, and kids. We love where we live, we love what we do.” Throughout his long term, he’s lived on campus. “To be in a school that is seven days a week, you might think that might be overwhelming, in the sense of when does everyone get a break. But actually it’s like a little village in and of itself, and living in a village gives you lots of opportunities for seeing kids shine outside of the classroom,” a vantage point he clearly relishes. “We often hear that learning takes place 24 hours a day and just to be part of that experience with the kids … it’s a little bit corny, but most days it doesn’t feel like I’ve got a job. I’m just a member of the community, and I love being part of it.”

Grainger is absolutely visible, and on any given day you’re likely, if not guaranteed, to see him interacting with staff and students on campus. He describes himself as an early bird, and often begins the day with students in the cafeteria, much in the way that you might meet friends for coffee. He says that morning assembly in the chapel is his favourite time of the day. “We have 500-600 kids all together from all across Canada, different countries from around the world to connect face to face. That’s an incredibly energising feeling.” There’s the inevitable administrative work, though he also meets with all the new families that visit, attends sports events, arts events. During break times, he’s there too, meeting with kids and staff.

If you ask students if Grainger has a motto, they’ll invariably answer “care more, try harder.” (We did and they do.) It’s something of a mantra for him and, by inference and repetition, for the school as well. He’s also likely to amend it a bit, as he did when speaking with us, by saying that “if you have the first, you don’t even really need the second.” For him, caring more means that you’re passionate about something. You care about the people around you. “You care that there’s a human being about to come through the door, so you hold it open.”

“I am asked all the time ‘what kinds of kinds are you looking for for TCS?’ And I can’t believe that question.” His disbelief comes from what is implied--that the school is only looking for high fliers, academically and athletically. “We are looking for any kid that is capable of completing the program provided it is within our zone of expertise. Give me any kid. The university stats and all that kind of stuff, that’s not where we’re really satisfied. If you’re a genuine educator, a genuine teacher, you just want to have an impact on a kid's life.”

We talk a bit about growing participation, at which point he talks about the value of “undermanned spaces.” He gives the example of a volleyball team that only has eight players attending. To play a game, they need some others to join in. “It’s not ‘we want you’ it’s ‘we need you.’ … and if you don’t show up, they we’re cooked.” That’s something--situations where students are needed--he looks to replicate in all areas of the school. “When parents say to me ‘you’re trying to do too much, I say ‘I take that as a compliment.’” By offering more he feels you create new leadership opportunities, as well as more chances for students to find things that they’re good at and experience belonging.

During Grainger’s tenure at TCS there has been considerable capital development, seen most recently with the opening of the Arnold Massey ’55 Athletic Centre. Though, he’s careful that whatever changes are made, that they reflect back to the core ideals, to the traditions and the history of the school. “When we created the strategic plan,” he says, “we asked ‘What is going to be the key to Trinity College School?’ And no matter what is going on in the world, we have to stand for integrity, compassion, and kindness. And those values are referenced from 100 years ago. The history is in a series of personalities that sat in the same place that you are sitting in now. So that appreciation, respect, value-oriented leadership, value-oriented living, still remains as fundamental to living a purposeful life.”