How to grow a school

For architect Elie Newman, it begins with a community, a sense of possibility, and a master plan 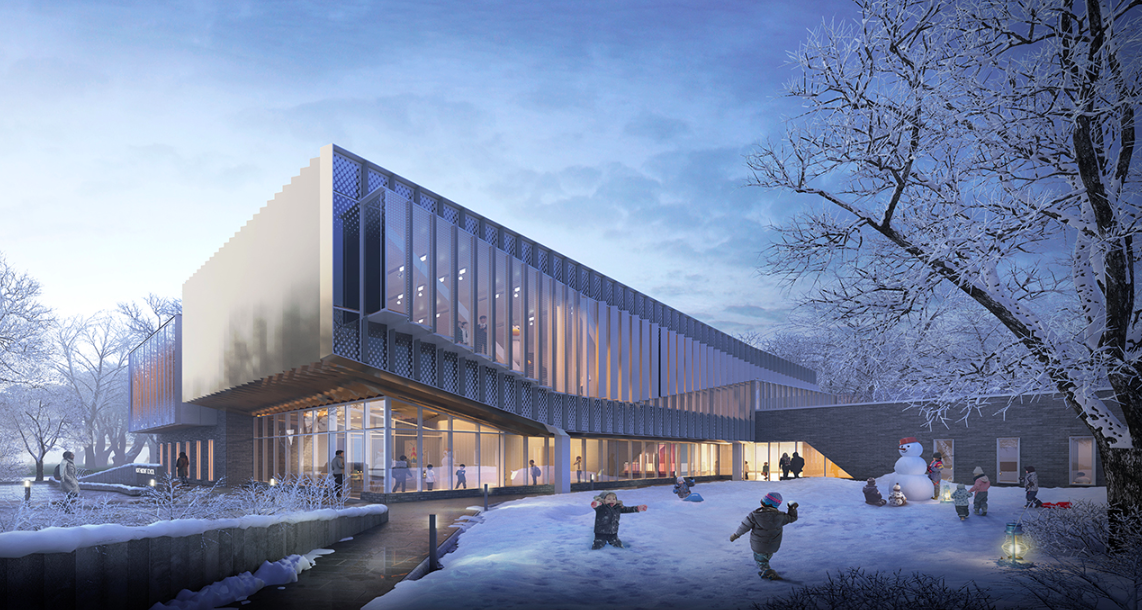 “As they’ve grown they’ve filled out the spaces and changed their uses,” says Elie Newman about Northmount School. “And now they’re busting at the seams."

That’s true in more ways than one. Northmount is an independent Catholic school for boys in Toronto and, while it isn’t large, it has been growing steadily. The building it currently occupies is the one they moved into at the founding in 1990. It was a school prior, if a different kind of school, and today the space is increasingly unable to meet Northmount’s needs. There are more students, for one, though it’s also about how the space is used, dictating a need for bigger classrooms, multi-use spaces, and storage.

But there are other needs, too. The school has proven itself over the course of three decades. It has gained a footing in the mosaic of education, first by serving the families that founded it, and then others who were attracted, rightly, to the quality of the offering. For the school, this moment of development can signal a new era in its life; it's an opportunity to restate the identity and the values around which it was formed, both to the school community and to the world beyond. So, while they need more space, administration realises that this is a bigger moment than that alone might suggest.

Enter Elie Newman, principal architect at BNKC. While he builds lots of things—entering his office in Toronto, there are models of towers, even a city—academic settings are a particular passion. Through projects like The Bishop Strachan School’s (BSS) Transformation Project, completed in 2018, he’s not only building new learning spaces, he’s transforming how we think of education itself. Northmount wants to tap that expertise, and has brought Newman in to close the gap between those poles: identity and structure; what's come before and what comes next.

Were you to google “school” and then select “images” you can imagine what you’ll see. There are photos of desks in rows, lockers lining the hallways, and lots of institutional lighting. The exteriors are brick, there’s the door in the middle, and there’s a flagpole out front.

The fact is, schools increasingly don’t see themselves that way and neither does Newman. The work he did at BSS is an example of that. The BSS façade—what you see from the street, as fronting onto Lonsdale Road—was completed in 1913, created by the same architects who designed Hart House and the Royal York Hotel. It was crafted to reflect an academic tradition, specifically that of UK independent schools such as Eton College, Harrow School, and Winchester College. Walking around the back—the school sits on a parcel of land that occupies a complete block, so it’s easy to do—and you experience a study in contrasts. “We are that front,” says Head of School Dr. Angela Terpstra, “but we are much more than that front.”

Indeed that “much more” is what Newman’s design—the entire back of the main building as well as the bulk of the interior—demonstrates. It’s glass and metal, with the inside spaces interfacing with the outside. From the back it looks, frankly, like a different school, though it’s not only (or even mostly) about looks. For Newman, the finished structure is the end point of a process of discovery that is based in participation, first polling all the stakeholders from the board, to the administration, to students, families and alumni. The goal isn't to adopt a tradition, but to establish a new one.

The process of discovery is used to create a master plan, and Newman is careful to draw a distinction between a master plan and a concept design. “The master plan stage is a real look at who they want to be and how they see getting there.” It’s not so much about strategy, and there aren’t any images yet to look at. It’s based on an exploration of needs, possibilities, and aspirations. Costing and budgeting are understandably part of the discussion (“like most independent schools they had finite resources,” he says, though that’s true of everyone) but there’s also a lot of thinking in the blue sky, taking the time to think big thoughts.

For Northmount, says Newman “It was everything from, ‘What would be a minimal look at what we could achieve?’ to ‘What would be the option that would achieve everything and more into the next 15 or 20 years?’” At the thinnest end of the wedge, the needs are strikingly specific. In Northmount’s master plan, for example, there are calls for better located mud rooms and a closet to store musical instruments. They’d like a bigger cafeteria that can seat a growing student body.

But the plan addresses the thicker end of the wedge as well, including things that strike at the very heart of what the school is, what it intends to do, and how it hopes to comport itself in a busy social and academic world. For example, a goal of the project is to support learning outcomes. For Newman, that means making the architecture suited to openness in education, transparency, and focused more on participation and collaboration. It means allowing for different teaching styles, and creating spaces that are properly sized to meet them. “Those are all things that are important to us and that we spend time getting into the actual built projects. … spaces that can implement those desires for collaborative education.” 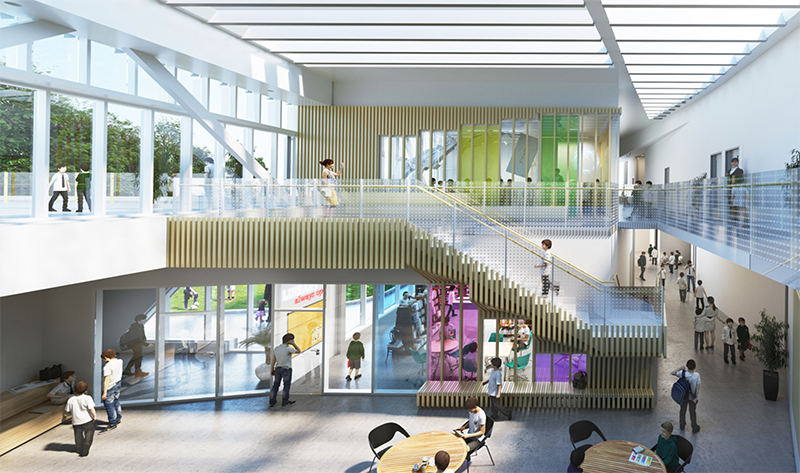 Developing a new language of education

The master plan for Northmount ultimately reflected the middle ground: taking the existing assets and bringing them significantly forward—if not reinventing the wheel, then certainly changing the tires. “This school is interesting,” says Newman. “This school has a central space today that I really love. It’s a bit dated, but that’s fine. They call it the Agora.” It's the knuckle of the school, the intersection point of the two main wings. Students each lunch there, and attend a school-wide assembly there each morning. During the day you’re as likely to see some friends deep in discussion as you are a class investigating a new concept. “It’s a multi-purpose space, and it works that way. It’s a very successful space. So, when we decided to add a second story, we thought it was important to have an overlook into that space, and to improve that space.” Improvements include allowing more natural light, using warmer finishing materials. Taking what is there and making it moreso. “Talking to all the different people, that is one of the places they loved the most. They wanted to see it preserved as a core part of the school, and we said ‘absolutely you’re right.’” He adds, “I think those places are very important, because it speaks to ownership—even parents and staff—and it lets them own it. If you give a school a place like that, it will become the identity of the school.”

In other ways, the design is an absolute departure, much as the back of BSS departs from the front. There will be glass along the exterior and throughout the interior as well. The design will meet structural needs, specifically accommodating a second story, and conceptual ones as well. “You can see the education as you’re walking through the building. Spaces that are not just formal learning spaces, but that are a little more relaxed, a little more informal.” They’re also maybe a little more human, less institutional, a little more inviting. Classes aren't hived off, and as you move through the school, you'll see the full range of activity happening within it. Students will have a greater sense of how all the various parts—the discussions, the content, the disciplines—relate to the whole, contributing to an ethos of achievement. “That’s maybe one of the reasons they chose us,” says Newman of the Northmount School. “We’ve done spaces like that in other schools. And we’re developing a language for that.”

It’s a lot, and the design for Northmount addresses all of it, from space to put the instruments, to a restatement of the school’s identity, to furthering a sense of commuity, one that reaches forward to meet the future. The most obvious aspect will be the front of the building, which will be entirely reimagined. “It's very different. And it says ‘we have been successful, we are growing, this is a quality institution.’” Where the rubber meets the road, though, are the interiors. Per the brief, “spaces throughout the building are designed for flexibility and teamwork, promoting the long-term academic objectives of the school.”

In all, it’s a very exciting time. To date the master plan has been completed and the real work of the design is well underway. There are now images to look at including three dimensional renderings. In a year or so, and all going well, the design will begin to take shape in more tangible ways. While not the firm’s largest project of this type, Northmount will be an important one. When it is completed it will be at the leading edge of educational design.