Learning in the spaces in between

When Glarea first opened its doors, the intention was to be different. It is. 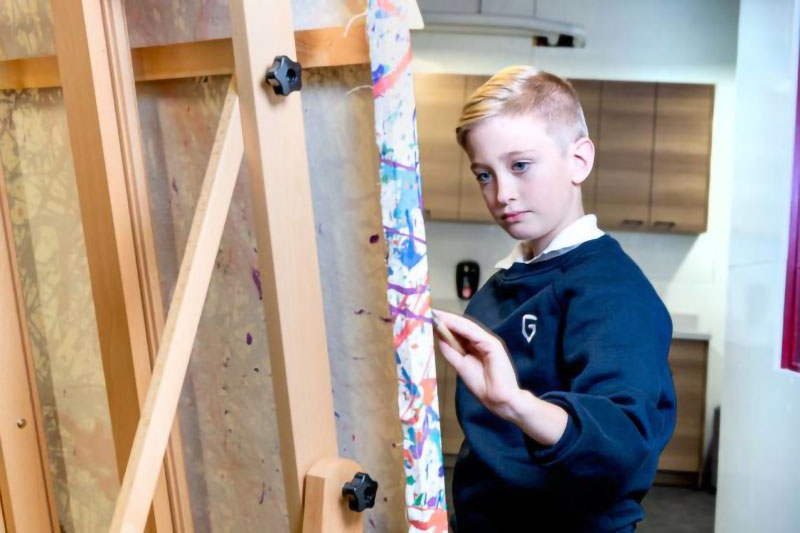 “I really need to share this, because I think it’s a fantastic story.” That’s Rita Rai, the founding head of Glarea Elevated Learning in Surry, BC. The school is new, and the first full academic year was also the one in which COVID upended everything. You’d think that’s what Rai might talk about when asked about the experience of the first year.

But it isn’t. It’s this: “We had a student in grade 5,” she says, “she wrote a story for a language arts socials project. All the children read it, and I’m not sure how the conversation went, but from that it became a script. Now all of a sudden they were looking at how many people there were in the classroom, how many parts there were, how many characters there were. From there, the arts instructor, who was doing musical theatre at the time, heard about it and took that script and said ‘ok, let’s do some character development, let’s do some costume design.’” There is a palpable excitement in Rai’s voice as she tells this story, as well there should be. The initial project became a script; the script became a production. And still, it kept growing.

The faculty had been planning to mount a show prior to the winter break—perhaps the typical kind of elementary production, charming as they are—but when they saw what was developing, they decided to run with it. “Then we had this other Grade 5 student, she meets all her academic goals— she’s really dedicated in that way.” She’s also really quiet, says Rai, someone who, in her old school might have hung at the back of things, staying out of the way. “But here, in this environment, she asked if she could record the play.”

And so she did. Others pitched in as well. To their credit, the teachers guided the students, supported their curiosities, and then got out of their way, allowing their enthusiasm to rule the day. Ultimately, the teachers decided to cancelled the planned production outright. The recording that the student made—she spent hours on it, using staff expertise and school resources to edit a complete, finished video—became the winter show, presented online.

“Where are the classrooms?”

Rai tells that story because, for one, it’s delightful, but also because it demonstrates one of the values that, when creating the Glarea program, she wanted to build the school around: an open mind, and a playful, flexible approach to learning. “We also understand that, you know, we might have a plan. But sometimes you have to move away from that. And when you see something like this, you can’t pull the students away and have something that just because it was on our calendar.”

It’s telling that, when asked to talk about what makes the school singular, that’s what Rai thinks of first. This particularly in light of the fact that in many ways, this isn’t your average school, and there are lots of things that make it singular. For one—and perhaps to the casual observer it’s the most obvious—the school looks like a hockey complex. Which, in a sense, it is, or at least it used to be. “One of the hard things to understand about Glarea is that we’re on ice rinks,” says Ria. “Parents ask, ‘Where are the classrooms? What do you mean?’ I think that’s the biggest challenge for them.” Still, she sees that disruption of expectations as one of the strengths of the school that she’s had a hand in creating. “What’s so unique about the building are the transitional spaces. I think that’s one of the most exciting things about what Glarea is all about.”

While the school opened recently, it had been in development for seven years before welcoming the first students. In that period of development, Rai along with co-founder Nadia Irshād, dedicated themselves to that idea: what is Glarea is all about? For one, they wanted it to be more immersive, a place to really make the most of the transitional spaces. When Rai uses that term she’s speaking about the physical spaces; when students move between classes they overlook the rinks below, which are used for recreation. But she’s also talking about the academic transitions, and the desire to intentionally blur the lines between one discipline and another, and to find creative ways for students to see how language relates to the arts, or how technology relates to theatre, or how children’s interests can deployed in new ways.

“We have a set of siblings, one who is in Grade 5 and one who is in Grade 3,” Rai says, clearly delighted by this story, too. “Dad plays hockey. He’s played hockey all his life. Both the boys were put into hockey, love it.” Fair enough. But, at Glarea, the younger son started designing games, and exhibiting a rich talent for it that might never have come so fully to light were it not for all those overlaps—all those transitional spaces—within the Glarea environment. “Now, all of a sudden, yes he does hockey. But they’re also putting him in a program where he can explore that interest. And, you know, this is what he does.”

“It’s been fun to see those kinds of things,” she says. “Those are the stories I love sharing. Just to have the students feel like they’re being seen.” Putting the rinks and the first impressions of the building aside, that’s the thing she hopes will define the Glarea program more than anything else. It’s kind of school where kids won’t get lost in the shuffle, or hide the back of the room. It’s a place where instructors are willing to, when appropriate, go a bit off script. A place where everyone will work together to use their curiosities and talents to build something, well, new. “Where are the classrooms?” Rai answers, “They’re everywhere.”