What makes a great teacher great?

What should parents be looking for in educators? We asked one of the best.

Beth Alexander, a primary and elementary instructor at The Linden School, is a teacher that a lot of people think is great, including the prime minister. In 2017, she received the Prime Minister’s Award for Teaching Excellence, and this year she was the first Canadian educator to earn a Lowell Milken Centre Fellowship. Beth is a STEM teacher extraordinaire, which is likely why she came to the attention of the Lowell Milken Centre. She built the school’s makerspace herself out of salvaged materials; she constructed a life-size model that allows students to climb inside a computer; she created a lab to explore the chemistry of candy; there wasn’t a K-8 computer studies curriculum, so she wrote one. But all of it, she feels, is in service to a set of relationships: those between her and her students, and those they share with each other. For her, learning begins with those relationships. And when it comes to great teaching, she knows what she's talking about. We asked her about what she likes to see in educators, and what she hopes her students will see in her. 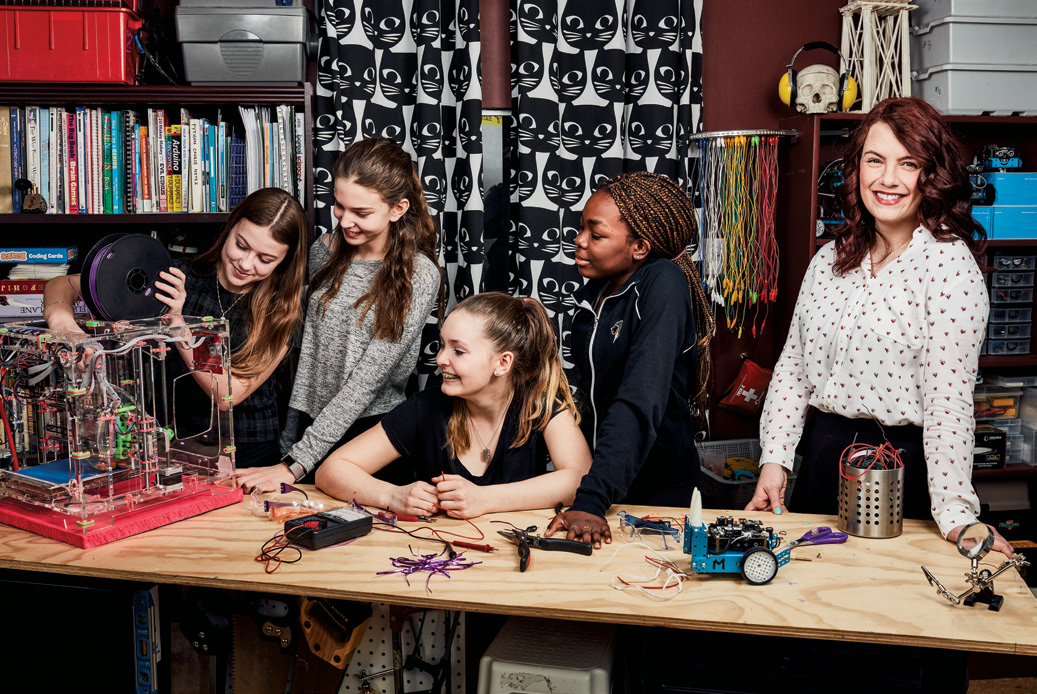 Beth Alexander with students in her lab at The Linden School
Photo: Markian Lozowchuk

OurKids: What teacher did you have that really stood out? Who was your great teacher?

Beth Alexander: I had two high school teachers that I thought were great. One of them was really strict. He had unbelievably high standards and gave so much work that we thought we would die. But he obviously really cared about the kids, so that combination of firm boundaries and a lot of love was really motivating and helped his students really grow. And then the other was the most loosey goosey. He let me take two weeks to research whether Paul McCartney really was dead and then give a presentation. Like, I gave this multimedia presentation about whether or not Paul McCartney was dead, which probably wasn’t in the curriculum! [laughs] But I learned so much from it. I don’t know why I cared about that topic, but I did, and he honoured what I was interested in; he didn’t impose his ideas on me; and he gave me a lot of freedom and encouragement.

Those two teachers were very different from each other, though I think kids benefit from a lot of different teaching styles. As long as you’re passionate about what you’re doing and really care about the kids, I think the particular style of teaching matters a little less. And it’s good for kids to see a bunch of different folks, because that’s the world.  They’re going to work with a lot of different people who have different kinds of expectations.

But both of those teachers really cared about me and they were both open to who I really was. That’s key. I distrust those teachers who say "here are my lesson plans for the entire year and I will not be deviating from them." Well, what about the actual kids? Are you going to listen to what they want? Are you going to respond to what their needs are? Because you need to be flexible enough to do that.

In twenty years’ time, when students think back on the time they spent with you in the classroom, what do you hope they will remember?

Sometimes students will come back and tell me things that they remember, and it always surprises me. Often, it isn’t the things that I worked really hard on planning. Often it will be spontaneous things. So I think having a sense of humour is important.

But when I taught a core class and I had the same students all day long, I would send them anonymous surveys pretty frequently, just getting their feedback on how things were going. And one of the questions that I would always ask was “do you genuinely believe that Beth cares about you?” And if I got a single "no," I would be really worried about that, and I would figure out what was going on. Because young people need to know that the grownups in charge of them care. That they’re seen and valued for who they are. I would hope that my students felt that that was really obvious from my relationships with them. I would also hope that they found the things I taught were interesting and useful, but that’s secondary. A really caring person who has a great relationship with students could probably teach the history of dirt and the kids would care.

You’ve been described as an innovative teacher. What does it mean to be innovative?

When I was growing up, science class was: read three pages in a book and answer five questions. You wrote down the questions in your lined notebook, and you wrote the answers, and your teacher judged you 50% on the quality of the facts in your answer, and 50% on the neatness of your handwriting. That was how you earned grades. And if you were quiet while you did it, you got an A.

So, things have changed, but I think good innovators are people who don’t just change for the sake of change. That sort of innovation gets a bad rap, and I feel dismayed when some demand comes down from the ministry saying "you have to change this" when the old way was just fine. You know, reading a book aloud to a class, what can be a more old idea than that? Yet, in all my years of teaching, when I think about those moments when the kids were riveted, I was reading from a book.

But I think that the true spirit of innovation is when you’re constantly seeking to improve by being thoughtful about what is happening. I started a program here that combined a makerspace with a more academic idea of a makerspace, where you’re really using pretty high-level engineering skills to get kids to learn by doing. The fun in it is coming up with the new ideas, but the rigour in it is in genuinely assessing how well those ideas are working, and throwing out what doesn’t work and bringing in something new. And that involves consulting with a lot of people—I’m on Twitter a lot, grabbing ideas from other people, I’m reading the paper—and thinking about things that could be brought into the class. That’s innovation that isn’t necessarily about using a new machine, but thinking of a new connection. And that’s one of my favourite aspects of the job. Coming up with new connections, and rethinking things. Is there a way to take something hard and not necessarily make it less hard, but to find ways to motivate kids to push through the hard parts of it? The more multi-sensory something can be, the better. If you can touch something, if you can move it around, if you can taste it maybe—those are always better ways of teaching than just listening or reading. I’m not teaching in ways that I was taught in school, but instead trying to figure out about how kids learn better.

What are the moments in which you think “this is what it’s all about, this is why I’m here on this earth”?

The thing that I feel is worth as much as my paycheck are those moments when a student has discovered something new. I have a student who is in junior kindergarten, and every day is a brand new day for her. She comes into the lab, and she’ll get to use a tool for the first time. She used a pair of pliers one day. Another day she was using a handsaw—so she had on work gloves on and was given that opportunity to use an adult tool—and the joy on her face was unbelievable. The privilege of being able to introduce those things to her, that’s one of those moments where you’re like, "Ah, this is so fun!" That is worth a million dollars right there. They light up, you can see the adrenaline in their body and the excitement. When a kid says “I get it!” that’s catnip to me. That’s the sound that every teacher wants to hear.

Six habits of highly successful teachers
Beth Alexander on what we should be looking for in educators:

“A willingness to work hard. Teaching is a difficult profession.”
“Really motivated about teaching. Excited about it. If you are not excited about teaching, you don’t stand a chance. Because it demands a lot.”
“Genuinely loving all kids in all their different flavours. Because kids are not all alike.”
“A sense of humour. Loose, fun, flexible people make the best teachers.”
“Someone you can have a great conversation with”
“A person who wants to try new things”