A place for children

The York School is not specifically a Montessori school. But Maria Montessori would have loved it, nonetheless: the school is animated by a passionate focus on making learning hands-on, social and engaging. 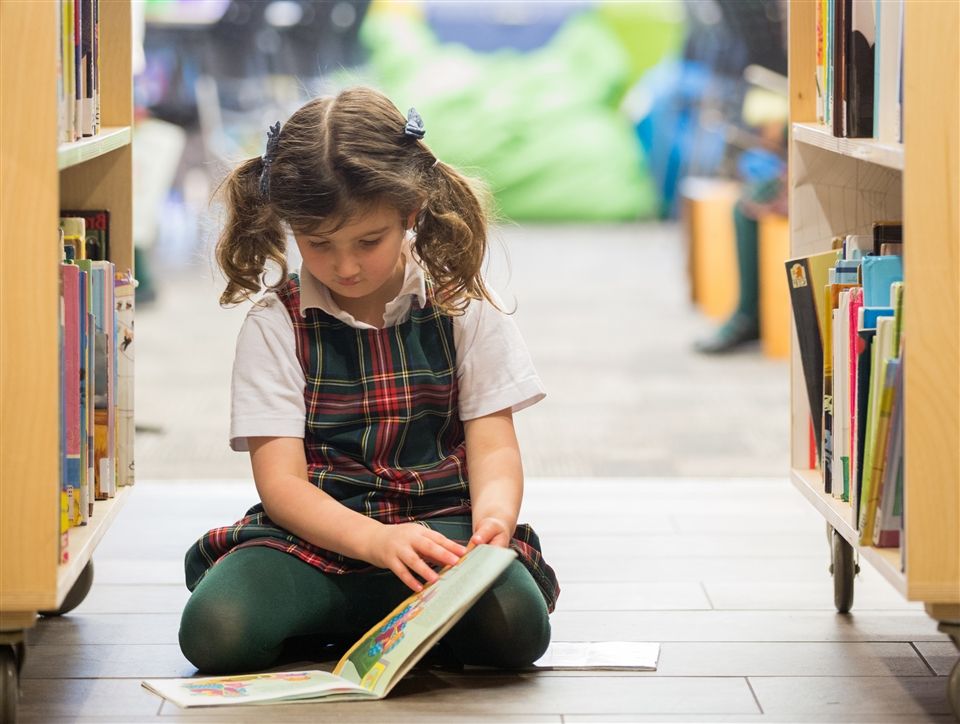 “What I love most about the space,” says Valerie Turner, “is that I can open my window and I hear the children playing.” Turner is principal of the Junior School at Toronto’s York School and her office is a crisp, welcoming environment in keeping with the overall aesthetic of the school. The windows in her office open onto the playground behind—she looks out just as the children outside are able to look in and see her working, meeting with teachers and parents, and going about her day. The sound of children provides a soundtrack to Turner’s day. After a pause, she adds, “it’s euphoric.”

Turner became principal at The York School in 2019, bringing extensive experience gained through similar roles at Havergal College, the Latin School of Chicago, the Munich International School, and Robbins Hebrew Academy. She’s known as an innovator—she was literally present during the development of the International School Curriculum Project, a precursor to what would eventually become the International Baccalaureate Primary Years Programme (IB PYP)—and one of the things that attracted her to The York School was exploring the boundaries of education. “Because The York School is not a storied place, like many schools that have been around for one and two hundred years, managing change is something people are inspired by, not something that people are worried about.” For her where the rubber meets the road is in that ability to turn good ideas into best practices, something she sees as central to The York School since its inception in the 1960s. “I think to be innovative is to be able to move nimbly as progress in education changes. … It’s about being able to act.”

“a house for children”

If there is a tradition at The York School, that’s it: finding new ideas, acting on them, and in turn inspiring educators and learners with the results. York was the first school in Canada to offer the full IB curriculum from Junior School all the way to Grade 12,  and the fourth in North America. The school is increasingly a model for what it means to be an urban school. It’s not an exaggeration to say that they’ve essentially defined the concept. From even the early years, students are encouraged to explore the world around them, both within the school and beyond its walls. The junior students take daily field trips—walks to explore the surrounding community the parks, the green spaces, and the ravines that run near the school. Teachers have enhanced and adapted the walks, this in line with the curriculum as well as the dedication to experiential learning. But for the students, they are just grand adventures, off with friends and teachers to see the world. As the students move through the programs, their interaction with the city grows too. In the Upper School, the Integrated Canadian Experience (ICE) program, a combined study of Canadian history, geography, civics, and literature, has rightly turned heads.

Turner is clear that everything has its place. For her, the most important part of being an educator is the relationships that the school develops with the children and their families, a place where teachers really know their students. The York School began as a Montessori school, and while that was some time ago, some key similarities remain. The sense of place, and the emphasis given to the learning environment, is one of them. There are clear and obvious echoes of some of the core concepts of the Montessori method, one that heavily influenced the school in its early development.

“We had prepared a place for children,” wrote Maria Montessori about her first school in the San Lorenzo district of Rome. “Ours was a house for children.” That’s something that The York School is a study in. Walking in from the bustle of Yonge street it feels like an oasis, a welcome breath of fresh air. There are bright, open spaces, and lots of porous boundaries. To the right, the hallway flows into a bright, inviting library. (“If you want your child to be a better reader,” says Yochabel De Giorgio, Director of Curriculum, “the first thing to do is get a book in their hand.”) To the left and down a slight decline are some classrooms, the hallway lined with jackets and shoes. The play spaces to the back of the school can be seen from various points in the building, and that’s intentional.

“planning around them, not for them“

The proximity of the play spaces—that they can be seen and heard—is also intentionally part of the program of instruction: getting kids involved, working together, using their hands, being active learners. “Anything that’s fun, kids want to continue doing,” says Turner. “When they get to explore, investigate, and develop theories, that’s really fun for them, and it gives them a level of motivation that also enhances their confidence … in whatever they try next. From the warm inviting space to our teaching methodology, we want to cultivate these lightbulb moments, those sparks of joy when students understand something and want to pursue it further. That’s what we live for.”

Which is why the IB programme is such a great fit for the school. “I think that the Primary Years Program is what every parent is looking for,” says De Giorgio, namely a program that is focused on the students, “planning around them, not for them.” For her that means ensuring that learning is centred on the talents, ideas, voices, and interests of the students themselves. Says Turner, “We’re always trying to capture that notion of student agency so they become familiar with self-awareness and self-control and all these things that make us human, while at the same time learning the core academics,” of literacy, numeracy, and the humanities. “So they’re not only finding it fun and exciting, but they’re guiding their discovery.” Rather than a teacher who’s delivering a program that’s covering the curriculum, the students are working with the teacher to uncover the curriculum.

“Education is not something which the teacher does … it is not acquired by listening to words, but in virtue of experiences in which
the child acts on his environment.”
—Maria Montessori, The Absorbent Mind

“If you look back to the way that you were educated, or I was educated, we were given everything. We were told to memorize it or practice it and we felt very good if we were able to give it back to the teacher the way the teacher gave it to us.” At York, the children are allowed to make choices in their learning, the teacher guiding the process within the framework of the curriculum. “They very much feel their part of it. They feel like they’re leading it, for sure.” Turner adds, “You know, kids are eager for knowledge. They’re capable of initiating their own learning when they’re supported sufficiently and when the environment is well prepared.”

“everybody wants to get their hands dirty”

Outside of pandemics, Turner joins the kids for lunch every day, a time that she cites as one of the most satisfying of her work within the school. “It gives me an opportunity to get to know the kids, and to help triage whatever problems they’re experiencing that day.” The kids know she’s the principal, and that she’s always there. “I’m able to learn about their sensitivities and to help them develop a toolbox of strategies to solve problems. For me, that’s a highlight, because that’s when I’m closest to the kids.”

There are lots of important ideas in the world of education today, including issues around diversity and inclusion, curriculum, agency, access, digital literacy and the place of technology in learning. Those things are not lost on Turner, and she’s worked closely with all of them throughout her long career as an educator. Similarly, those conversations are evident throughout the school. There aren’t any smartboards, for example, because they had them, tried them, and felt that there were better options.

Still, when asked what The York School does best, she answers that “It’s the way you feel when you walk into our school.” It’s lower key, inviting, tidy. Beautiful in a simple, less overt way. It’s a place where you can breathe, and see others breathing, too. “It’s a place where everybody wants to get their hands dirty and be part of the experience.” A warm, inviting home base full of love, and support; the starting point for students to begin exploring their world. At the end of the day, that’s exactly what it is: a place for kids.

September 30, 2021
Teaching girls to change the world
After a year in the role of principal of The Linden School—and what a year it’s been—we spoke with Tara Silver about what girls need, how girls learn, and how the Linden School has pioneered in all of that.
August 31, 2021
School heads discuss choosing a school
We interviewed leaders of several private and independent schools to garner their advice and insights on choosing the right school.
August 31, 2021
Parents discuss choosing a school