The Our Kids guide to private Catholic schools in Canada


On this page, we cover private Catholic schools in Canada.

For a discussion of faith-based education in general, including a detailed discussion of types of schools and curricula, check out our guide to religious-affiliated schools.

Private Catholic schools educate students in the Christian faith, with a particular focus on Catholic doctrines, beliefs, and practices. Like other Christian schools, they teach students Christian values such as respect, responsibility, family, and community. They also encourage students to grow in the Catholic faith. That said, most of these schools don’t require students to practice Catholicism, Christianity, or any other religion (at least outside of school). In fact, some schools admit students from non-Christian faiths.

For instance, Northmount, a private Catholic school in Toronto, Ontario, has many students who aren’t Catholic. Chris Ruch, their director of admissions, estimates that 47% of their students aren’t Catholic. While Northmount teaches Catholicism and basic Catholic beliefs, its students come from a wide range of backgrounds. And, the school is open to a wide range of views. “We don’t require our students to be Catholic or to subscribe, without questioning, to a Catholic or Christian beliefs or values,” says Ruch.

Most private Catholic schools in Canada are coed. There are some Catholic boys’ schools and Catholic girls’ schools, though.

Religious studies curriculum
Private Catholic schools in Canada have a reputation for a strong secular and religious curriculum. On the secular side, knowledgeable instructors teach subjects such as math, science, English, and history in a rigorous manner. Teachers typically have a strong background in these subjects.

The religious studies programs in private Catholic schools tends to be rich and engaging. Kids often take several required religion or bible classes a term (which can make up more than a third of the curriculum). In these classes, kids learn about the Catholic bible, its application to life, and draw lessons from it. They also about the Catholic faith, values, and prayers.

Private Catholic schools educate students in the Christian faith, with a particular focus on Catholic doctrines, beliefs, and practices.

Students also learn about the seven holy sacraments of Catholicism, including confirmation and baptism. They also may learn about the theology of the body and communion, which are uniquely Catholic doctrines.

Peter Bacardi, teacher and chaplaincy coordinator at Northmount School, uses this integrated approach as much as possible. He also believes this approach is part of an authentic Catholic education.

“While Catholic schools conform to government-mandated curricula, they should implement their programs with an overall religious orientation. Such a perspective includes criteria such as ‘confidence in our ability to attain truth, at least in a limited way—a confidence based not on feeling but on faith and the ability to make judgments about what is true and false.’ Unwavering commitment to truth is at home in an authentically Catholic school.”

An integrated curriculum can also involve teaching Catholic values as part of the overall curriculum. For instance, at Northmount School, there’s lots of focus on character education, or educating the whole person. Kids learn about different Catholic values, and meet with an advisor once a month to discuss them. As Bacardi puts it, this injects Catholicism into the whole curriculum and into students’ lives.

“We integrate the use of scripture with other areas of school life, such as the liturgies, character lessons, and daily prayer. Catholicism is a ‘comprehensive way of life’ that should animate every aspect of its activities and its curriculum. To deliver on the promise to provide students with a Catholic education, we must foster love for wisdom and truth, and must integrate this with faith, culture, and life.”

Religious observance and Catholic prayers
In many private Catholic schools, kids go to Catholic mass on a regular basis. This might be anywhere from once a week to several times a day. In mass, kids pray with their peers and teachers. They also often say grace, a prayer of thanks, before meals.

In some schools, kids are given the option of going to confession. At confession, they say repentance and ask for forgiveness for moral transgressions.

Kids sometimes go to assemblies to pray and discuss the Catholic religion. And, there’s a long tradition of giving to charities among Catholics (and other Christians), such as shelters and food banks, especially during Christmas and Easter. Catholic traditions such as Lent are observed, during which students aren’t allowed to eat meat on Fridays.

A real attempt is made to teach students the Catholic faith, and how to live by it. Schools try to get students to integrate faith-based principles into their lives. This can be achieved in a number of ways. It might involve acting with kindness and generosity, giving to charity, participating in community projects, and many other kinds of activities. Private Catholic schools tend to have a strong secular and religious curriculum. 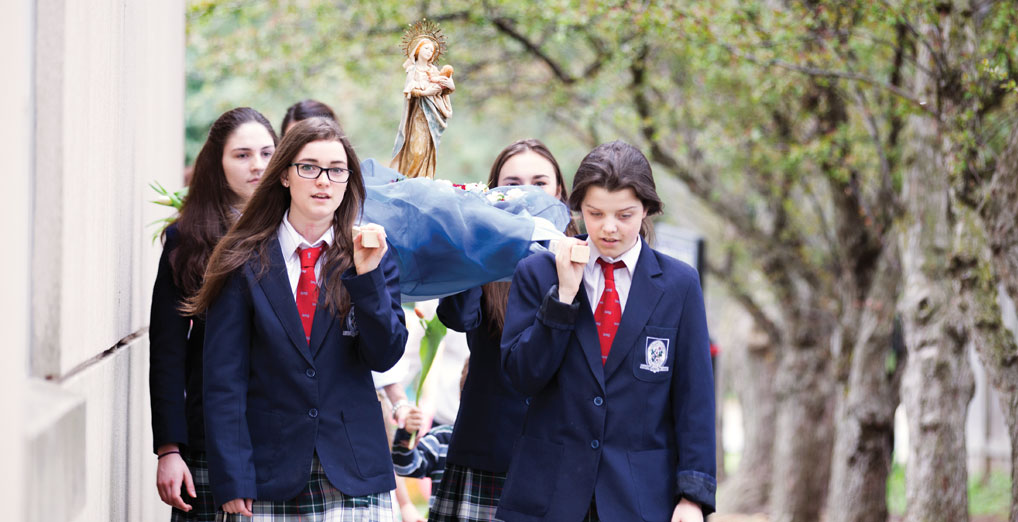 Students are encouraged to integrate Catholic principles in their lives in a number of ways, including acting with kindness and generosity and participating in community projects.

Private Catholic schools in Canada aren’t fully funded by the government. This means parents will need to pay for these schools. Despite this fact, these schools are a great option for many parents. In these schools, courses can be taught with fewer constraints, and teachers can use diverse instructional approaches—tailored to meet their students’ wide range of learning needs. These schools also often have smaller classes and lower teacher-to-student ratios than public schools.

Lauren Lowry moved her two kids, Oliver (age 11) and Thomas (age 7), from a public to a private Catholic school—Northmount. She’s been extremely happy with the change. “At Northmount, the curriculum is more demanding, and the teachers are more dedicated and passionate. There are also more enrichment opportunities than in the public school system. Oliver and Thomas have acquired better work habits, and are more engaged in school.”

Beth Duffy also enjoys the advantages of a private Catholic school. Her kids, Rachel (grade 11) and Eddy (graduated) have thrived at Villanova college, a private Catholic school in King City, Ontario. “Villanova is a home away from home. The teachers have helped my kids grow as persons. They experience life triumphs and defeats; that presents a lot of learning opportunities."

For a more in-depth discussion of these issues, see our coverage of private vs. public schools.

Private Catholic schools in Canada have lots of significant benefits. For starters, many of them have very strong religious studies programs.

“Our classes are taught by real clergymen—the brothers of the heralds of the gospel. The brothers also help students develop their spiritual guidance programs. Not many schools offer this kind of program. We offer a unique and authentic Catholic education.”

Private Catholic schools also have several other important benefits. We discuss some of the main ones below. Learning about the Catholic religion can help students build character and grow into mature adults.


In your search for the right Catholic school, it’s important to speak with teachers, educators, and your child.

Start looking at these schools early, as much as a year before applying. You can research them here on this site (starting with our list of schools), on school websites, at open houses, during on-site visits, at our annual school expos, and other venues.

Beyond these more general questions, there are also specific questions to ask private Catholic schools. These include:

It’s best to discuss these questions with the school head, as well as teachers. It’s also a good idea to do a classroom visit and talk to other parents, to get a sense of teaching philosophies, school culture, and the like.

Keep in mind, different schools have different curricular approaches, policies, developmental priorities, and the like. It’s important to gather as much information as possible before making a decision. This is sure to improve your chances of finding a school that’s the right fit for your child and family.

There are plenty of resources to help you pay for private Catholic school. Financial aid is quite common, with Catholic schools offering lots of scholarships and grants. Students who are accomplished or involved in a particular area, such as academics, art, community service, or athletics, may be eligible for a scholarship. If you can demonstrate need, you may also be eligible for a bursary to help subsidize your child’s education.

In many provinces in Canada, paying for a religious-affiliated school counts as a charitable donation, for which you can receive a tax break. Speak with a provincial government official for more information or read our guide on tax breaks for private school education.

There are some questions commonly asked about private Catholic schools. Some of these have already been answered, and so won’t be addressed here. We’ll only answer those that haven’t yet been answered or fully answered.

Does my child need to believe in God?
Not typically. The vast majority of private Catholic schools don’t require kids to believe or profess belief in God. On the other hand, some very traditional schools may assume their students believe in God. It’s unlikely, though, they’ll require them to profess their belief.

How strong is the secular curriculum?
Most schools meet and surpass the curriculum standards set by the provincial government of Ontario. Moreover, some kids find the dual-track curriculum of these schools challenging. Some also find it enriches their secular studies—in a way that can’t be achieved at many schools without a religious affiliation.

Some kids find the dual-track curriculum of private Catholic schools challenging. Some also find it enriches their secular studies—in a way that can’t be achieved at many non-denominational schools.

Do private Catholic schools make religious studies mandatory?
Most do. Some, though, have only optional religion courses. These schools, though, are usually Catholic secondary schools (high schools), and have lots of extracurricular religious activities, such as prayers, scripture readings, and assemblies.

As Barbara Bierman, executive director of the Ontario Federation of Independent Schools, puts it:

“Parents have to look for what best matches the environment in their home. That may be a cultural, religious, or pedagogical decision. They should be asking themselves: How does my child learn best? What sorts of schools match up to our faith system? Parents also need to consider the spectrum of different religious orders. For instance, Christianity has several denominations, so they need to look into that detail when considering faith-based schools.”

What kind of training should teachers have?
This varies based on the school and the subjects taught. To teach math and science, a strong background in these subjects is needed. To teach both secular and religious subjects, a proper secular and religious education (in the relevant subjects) is needed. Teacher’s college and specialized training in Catholic and Christian studies are also pluses. 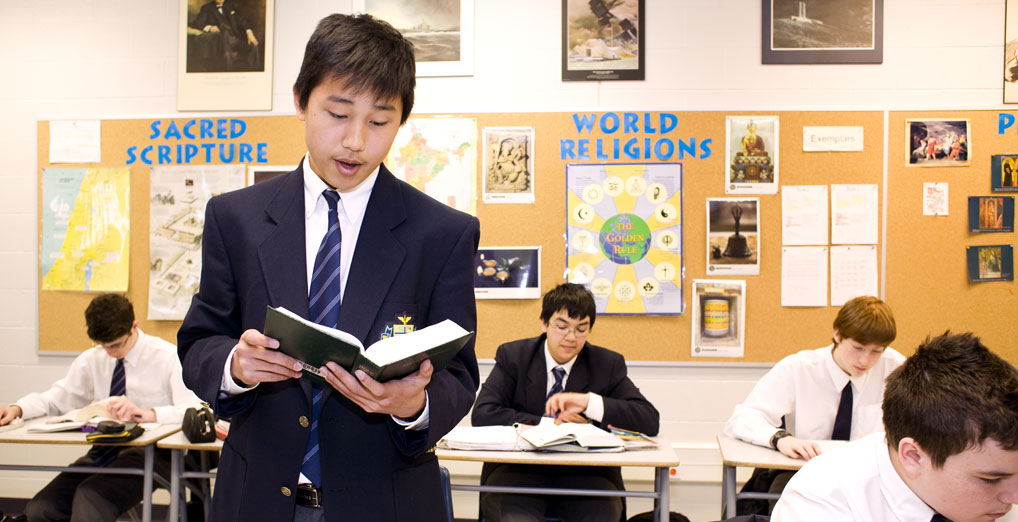 To discuss Catholic schools and private school education in general, go to our parent discussion forum.