What does it mean to provide a Christian-based education?

For students, it's about how they learn, not what they learn 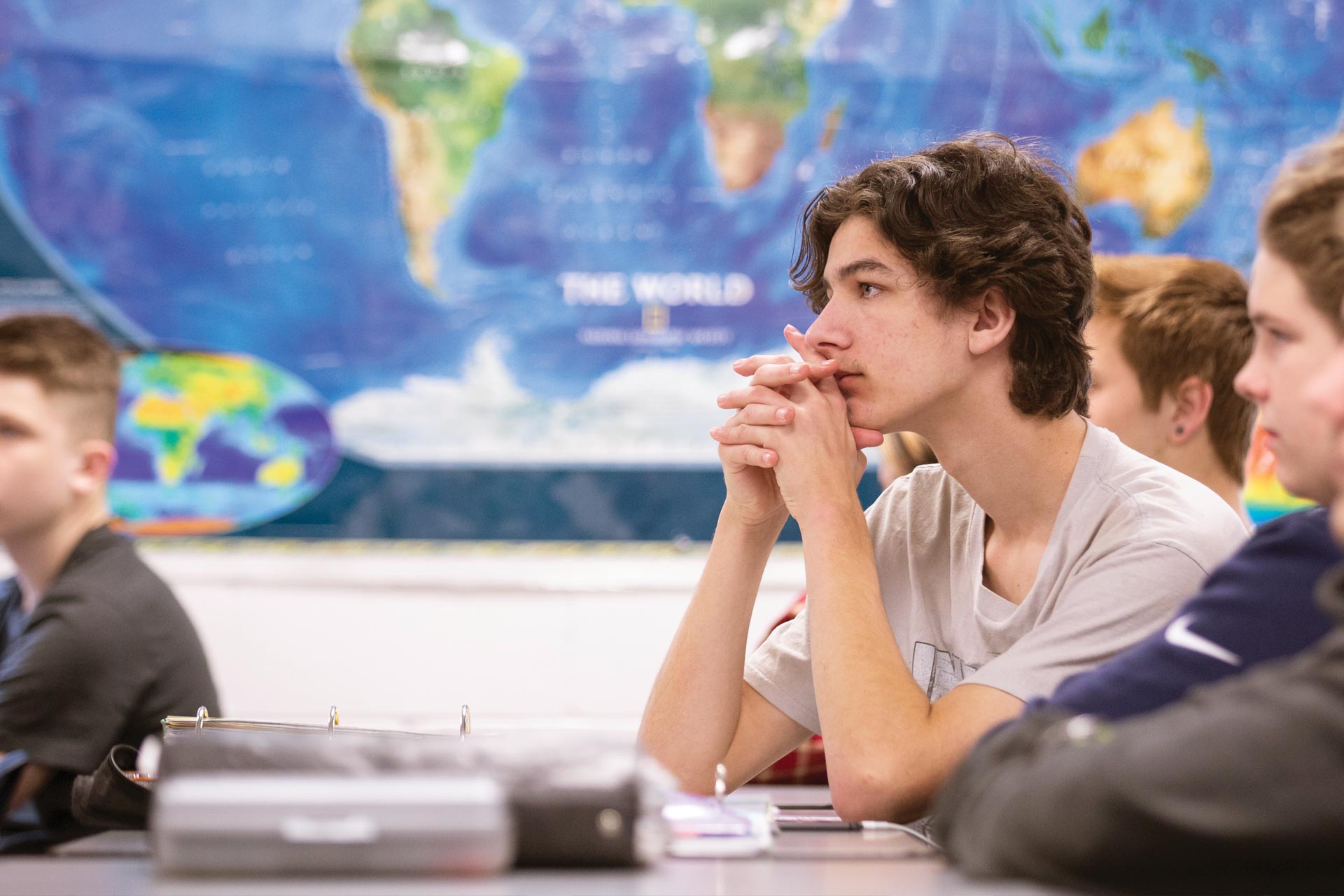 “It’s not a Sunday school,” says a student, addressing plainly and frankly the question that attends uniquely to faith-based education: What is it? “The really obnoxious question is ‘are you even a real school,’” says Tasha VanAnkum, a teacher at Woodland Christian High School in Breslau, Ontario. “And the extension to that is ‘are you even real teachers.’ For those that are really poorly informed, that’s the starting point.”

It can be an elusive concept given all the various forms that it can take, from Sunday school to seminary. That said, Woodland is a particularly good example of what curricular Christian education can be. The goal at its founding in 1976 was to provide a quality secondary education, principally for those intending to advance to post-secondary study, that reflects a Christian worldview, one where the values of the Christian faith underwrite the delivery of the provincial curriculum.

A current student told us that “I see the Christian perspective as an enrichment piece, in that it doesn’t take the place of other things.” Science is science; math is math. It’s less about content, more about perspective and approach, opening up spaces and opportunities that students won’t find in other academic settings. “It allows the students to learn differently,” says Mandy Wiebenga, an English instructor. “There’s a deeper learning that comes from a faith foundation that we can look to and rely on. Everything becomes bigger, more applicable. Everything becomes more significant. It’s not just a book that they have to read for English class [for example] it’s how that book can affect them in the long term.” Says another student, “it’s not just how we learn, but also how we conduct ourselves as a community and how we support each other.”

An approach more than a curriculum

“I believe that everyone, to some extent, worships something,” says John VanPelt, principal at Woodland for more than a decade. “They root their values in something.  Whether that’s themselves, or a religious idea, or humanism. For us, the heart of the Christian worldview is the recognition that Jesus Christ is lord over all of life, and so what we do, how we think, how our values are developed—that all needs to be rooted in what Jesus Christ presents and demonstrates for us."

The Bible is understandably critical that, though he notes that “we don’t want to approach every issue and open the Bible and say ‘this verse says this.’ I think that’s a limited way of viewing the bible. But we do want to look at the life of Jesus Christ. We want to look at what Jesus Christ has said, and try to understand our culture in that light.”

He adds, “I think that’s fairly basic, and I suspect there are lots of Christian schools” that follow that model. “The basic command that we have in the Bible is to love God and to love our neighbour. And that is what we work to make sure is evident in every aspect of the education: Understanding what loving God means, and understanding what loving your neighbour means. That’s throughout the curriculum, and it’s taught through co-curricular programs. It pervades who we approach the discipline of students, and it undergirds everything that we do.”

What students take with them

One of the things Woodland certainly isn’t—and this is something that VanPelt and others are keen to address—is a retreat from the world. “I think that sometimes people view Christian education as a way to separate us from the wider population. And, while we believe that we’re distinctive from the culture, we don’t want to ever be separate from it.” There are branches in the Christian tradition that have taken the view that the best place to live through their faith is by isolating themselves from the broader cultural context. From its early roots, the opposite approach has been a defining feature at Woodland. Students are encouraged to take part in the culture while living through their faith and their values. “It arises from our understanding that God created this world,” says VanPelt, ”and he calls us to participate in culture, in making culture, in developing culture. Sometimes in critiquing culture, but that can’t be limited to simply throwing stones and not participating within it.”

The goal, says, VanPelt, is for each graduate to have been granted a strong foundation in character. That they leave the school “a person with integrity. A person who is what they say they are [and] able to look at the diversity of the world and approach it from the context of a Christian worldview,” while recognising the great diversity within that context. “We work hard to ensure that all of the different perspectives are appreciated. … It’s critical to us that our learning is rooted in God’s word.”

“When we talk about issues, values, or things that influence the way we operate in this world, we want kids to understand how that relates to their faith. We want kids who will come out of here, not with a tone of judgement, but with one of compassion. People who can bring healing and restoration to the communities they we are involved in, [and] have the tools and the learning that they need to be successful in colleges, universities, workplaces, and beyond.”