Archeology in a primary school

Extracurricular activities: a great way to expand knowledge about history

In our 2019 report on private education in Poland, we presented the results of our own research for why parents choose private schools in Poland. Additional classes were listed among many factors affecting the quality of education. Their offerings and diversity are constantly growing—parents can choose sports, art, coding, and IT classes, but also more unusual classes, e.g., some focusing on nature.  continue reading...

This is the idea shared with our readers by the instructor and creator of the "Experimental Archeology for Children" classes, given the Warsaw Cultural Education Award in 2018 for the Polish-English Edison Primary School. This obviously took place in normal times, when it was possible to meet not only virtually. But hopefully these times will come back soon and "Lord of History" will be able to continue inspiring children with his passion.

Archeology classes are extracurricular activities that take place once a week since 2013 in the Edison School. They constitute an extension of the core curriculum to the subject of history and society, nature, technology, and math. The interdisciplinary nature of the course shows archeology as an important tool for exploring the world, whose methodology is increasingly based on knowledge from several fields of science. Classes conducted as part of the archeology club are a chance for students to experience history. 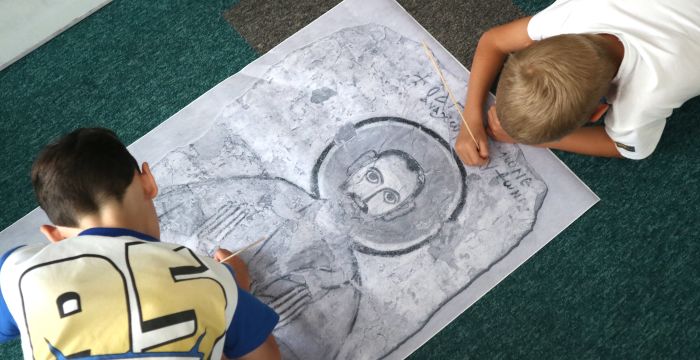 Objectives and participants of the program

Children aged 6 to 12, and members of the local community visiting exhibitions and participating in picnics implemented by the school and project partners.

The desire to become an archeologist, learn secrets, and discover the unknown has become the reason for the success of many computer games, movies, and novels. After some time, it is impossible not to ask yourself: does the work of an archaeologist have a lot in common with the adventures of film and game characters? What do today's archaeologists do on a daily basis? Do they have to wear a hat, ride a horse, or parachute? Are they masters in using a whip? Or maybe more desirable skills are: 3D modeling, knowledge of chemistry, physics, geology, and the basics of geodesy? How do they know where to dig, which monument is younger, and which is older? How can society use their work? 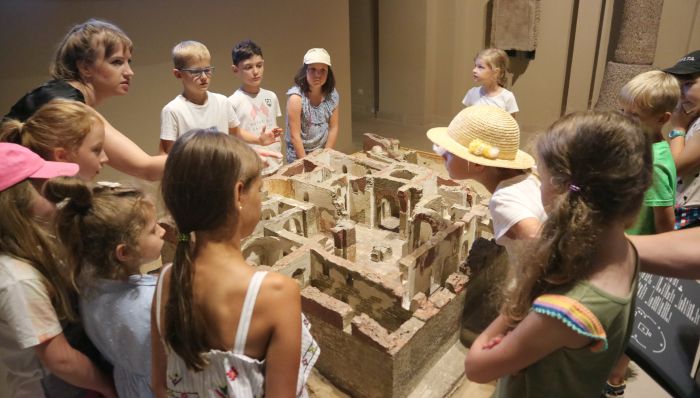 During archeology classes, students can learn about the past in the most attractive form to them—the interactive form.

In class, we deal with the lives of people in different periods. We learn what sources remain of them, what has been forgotten, and what accompanies us to this day. We learn not only how to understand the world around us, care for the memory and heritage of previous generations, but also to develop their creativity and artistic abilities. We are trying to find answers to questions bothering many archaeologists, e.g., how the found object was made and what it could be used for.

Another of the aims of the classes is to promote the achievements of Polish archaeologists. Students follow their latest discoveries and support them in great projects. They often visit the students coming back straight from excavations in Sudan, Egypt, Kuwait, Lebanon, Cyprus, Peru, and Turkey. Thanks to the constant cooperation with the Positively Historical Association and the Arkona, Team as well as the Archeoconcept company, students of the school can under the guidance of experienced reenactors also develop in the field of experimental archeology.

Class participants often take the initiative and engage in projects implemented by the entire school, such as the celebration of national holidays, organization of exhibition projects, and co-creating didactic boards for the school stage of the "Daily life in the Middle Ages" project. They also take part in major events, open to the people of Wilanów and Bródno, for example, by organizing a stand at the historical festival "When Bródno was a stronghold." Participants of the classes also implemented several semester projects, e.g., a children's reconstruction group, aimed at presenting the picture of life in the times of the first Piasts. 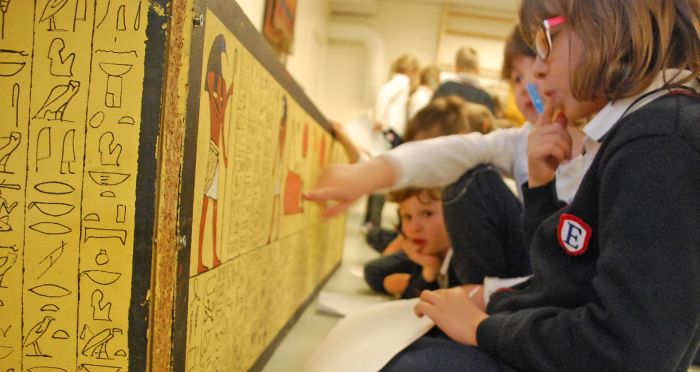 As part of initiatives related to the celebration of the 1050th anniversary of the baptism of Poland and the creation of the Polish state, the Edison School has prepared a series of workshops and presentations for their students. The main of these activities was conducting workshops where children would be able to do everyday life-related items themselves. Thanks to this, students get the opportunity to look at the discussed fragment of material from a completely different perspective. This brings measurable results in the form of better grades and an interest in exploring history independently.

During the classes, kids learned about sewing costumes from natural fabrics, how to dye clothes, how to weave, the basics of processing materials such as leather and wood, and presentations of jewelry techniques. They were also told about traditional dishes and games.

Cyberkartography, or workshops on GIS software for children, were conducted, where, together with learning the basic functions of programs from the Geographical Informations System group, there were issues in the field of geodesy, cartography, and historical geography. Classes used data from geodetic websites, plans, and archival maps of Warsaw, obtained during archaeological excavations. This allowed students to place historical events in the contemporary urban grid. As a result of the course, students have acquired the skills necessary to prepare their own, embedded in the system of geographical coordinates maps, operation of GPS receivers, and learned the secrets of the mechanisms of operation of websites based on GIS technology, useful in everyday life (jakdojade.pl, google maps, etc.).

In addition to the apparent widening of horizons, it gave them a tool for aesthetic presentation of data and for making simple spatial analyses, used in, for instance, in landscape architecture, environmental protection, and archeology.

We are only divided by kilometers

The project 'We are divided only by kilometers' consists in establishing relations between schools from Poland, based on cultural exchange and willingness to help peers in a difficult financial situation, as well as joint concern for local resources of the natural environment and civilization heritage.

In the first phase of the project, the history teacher Marcin Gostkowski went to Sudan to find out the needs of students from around Dongola, where excavations are carried out by the Polish archaeological mission from the University of Warsaw. 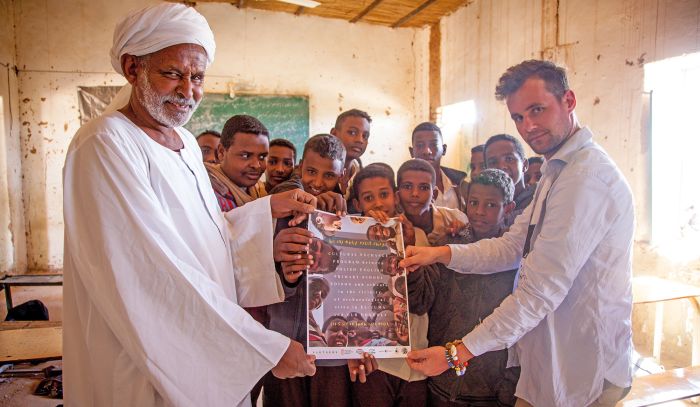 Next, the program will organize a charity picnic in Warsaw and a series of workshops familiarizing the Sudanese culture with the participation of willing employees of the Center of Mediterranean Archeology of the University of Warsaw (e.g., building mockups of Sudan monuments, music workshops, presentation of customs, cuisine, and art). From the funds collected during the autumn season of the excavation mission in 2020, they can finance the purchase of school supplies and organize a series of workshops for children in Sudan on local archaeological sites and environmental protection (partly conducted online by students in English, if technical possibilities allow). In the next stages of activities, it’s planned to organize funds for additional English lessons for Sudanese kids.

The method of task stations and field games are also techniques used in class. On the occasion of the anniversary of regaining independence, the oldest class played the role of instructors, guides for younger colleagues around the world at the turn of the 19th and 20th centuries. We prepared a field game where individual tasks had to be performed in subsequent classrooms arranged for interiors from the era of the reborn Republic. The children visited the recruitment point, encryption stations, camera obscura, a school near the partitions, met Ignacy Paderewsk, passed the drill, and learned the Viennese waltz. 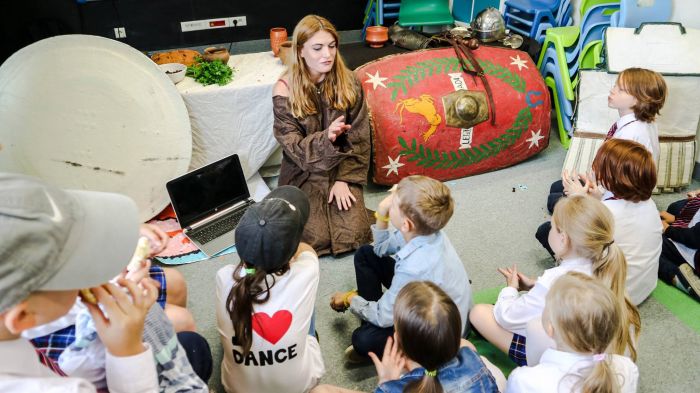 The originality and innovation of the concept

The Experimental Archeology project is a long-term program of workshops and presentations connecting the academic world with primary school. It shows the huge potential of archaeological sources in learning about human history. Numerous project partners associated with various fields of science (history, archeology, experimental archeology, monument conservation, geology, biology, and the latest information technologies) allow participants to implement interdisciplinary projects focused on practical activities. Another goal of the course is to promote the achievements of Polish archaeologists involved in projects around the world.

During projects, we often use online resources, literature available on archeology websites, archived maps, documents, and photos. In practical classes, we use iPads and software for graphic processing of Qgis and Agisoftphotoscan data. During the GIS workshop, they also used a total station and GPS receivers.

Some of the results of these projects are presented on the website panodhistorii.pl.

Currently, since schools are closed, the program is not implemented, but schools will finally open. And besides, the Lord of History informs Our Kids that he has some interesting plans ...